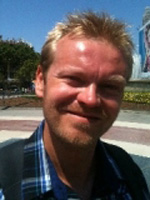 Andreas Ytterstad, Deputy leader of Concerned Scientists Norway, author of 100 000 climate jobs and green workplaces now – for a climate solution from below

The bridge to the future is not oil, coal or gas. The bridge is the 500 of us today assembled at the Peoples house in Oslo, a product of three years of collaboration between unions and scientists, environmentalists and the Church.

The bridge to the future is not even primarily the wind turbines we need to erect in the North Sea, or necessary railroads on shore. The renewable energy we most urgently need come from popular movements demanding a transition from fossil fuels to clean energy, across the world. Naomi Klein could not come today to our “marvelous initiative”, but we have heeded her advice from the closing chapter of This changes everything. We are building our part of that “geophysical” force capable of salvaging our civilization in time: popular resistance.

Last September 400 000 demonstrated in the biggest climate march in history in New York. Will a million demonstrate in Paris during the Climate Summit later this year?

We do not know that. But we do know that without a mobilization of popular, renewable energy, of international solidarity and love for all living life, we will not be able to push world leaders into action.

And we also know, that if some of the rich countries do not step it up and demonstrate the possibility of rapid emission cuts, there will be no progress in climate negotiations that state leaders have hardly bothered to even visit, since Copenhagen in 2009.

Norway is one of the most significant exceptions. We have sent prime ministers and environmental ministers. We are very active in negotiations – punching above our weight, as we indulge ourselves by saying. We have won prizes from environmentalists for our diplomatic skills.

But our emissions are not going down. They are going up. If our exports of oil and gas had been counted, our emissions would have gone even further up.

That is why it is no longer sufficient to think or negotiate globally on climate change. There will be no climate solution before countries like Norway start to act locally, as Gro Harlem Brundtland used to say in the late eighties, when we really did punch above our weight. The Bridge to the future conference demands a Norwegian transition. We want our emissions to go down, whichever way we count them. We cannot wait for negotiations with the European Union, or put our trust in their carbon market. We need a planned transition of Norway now.

A climate solution from below

What do we mean then by “a climate solution from below”, the subtitle of our Bridge to the future Conference?

But if we are to turn global emissions (which today rises by between 2 or 3 percent a year – good recent news on 2014 emissions notwithstanding), down between 5 or 7 per cent, countries need big structural change. Governments cannot flip a coin and cross their fingers that markets and the stock exchanges one beautiful day will price out fossil fuels.

To grasp the gravity of the situation, I would like say something about the climate scientist, Kikki Kleiven, who will address the Conference later today. I would like you to listen to her not only as an expert on the climate, but as the real head of the Norwegian Central Bank. Climate change is not only something we need to think about, a frame around everything, as leader of the Norwegian Labour Party Jonas Gahr Støre put it. The boundaries of nature is the bottom line. The most important, and the least flexible, budget rules must emanate from the Carbon budget: How much CO2 can a rich country like Norway afford to emit? How much can we stomach emitting into the atmosphere?

The Bridge to the future do not have ready-made structural change to offer, and we can – like the Norwegian Government – not put numbers on Norwegian climate targets. But parts of the trade union movement, the Church and most of the environmental movement in Norway, are developing a trinity of agreement on three crucial words which have created digestion problems for Norwegian politicians for 25 years:

Brems norsk oljeutvinning. In English, that is seven words: “Put a brake on Norwegian oil extraction”.

Those words are of particular importance after the Norwegian Government just proposed to give concession to pretty much all the oil industry wanted in the Barents Sea. 190 billion Norwegian kroners, the cost equivalent of 44 Opera houses in Oslo, is to be given to the search for oil and gas in the Arctic, where science tell us that fossil fuels really need to stay under ground.

Representatives of the two biggest parties in Norway (tory and Labor) are attending the Bridge to the future today. These are parties who have been plagued by pain in both the colon and the small intestine whenever somebody has tried to mix Norwegian Oil policy with our climate policy.

I am a journalism educator, and a scientist, so I try to be a realist every day. Politics will eventually change when two geophysical forces meet, climate change on the one hand, popular resistance to leaders incapable of bending the curves sufficiently on the other. Both Nikolai Astrup of the Tory party, and Jonas Gahr Støre of the Labor party, will say “Put a brake on Norwegian oil extraction” before they retire. That is a realist assessment.

I am also a pessimist, so I do not expect them to say those words at our Conference today.

But finally, despite reaching Level 42, I am 42 years old, I am an optimist. I therefore have a little bit of hope that when Astrup and Støre appear on stage after me, they will, before popular climate resistance in Norway, say those three words as a small breathing exercise.

(Alas, as press reports in Norway showed after the Conference, pessimism won the day, with Støre saying that no “profitable gas” would stay in ground).

To say put a brake on Norwegian oil extraction is not to say that we do not appreciate the tremendous labor and efforts workers in the North Sea and elsewhere have made to build the foundation of the welfare state we continue to enjoy in Norway today.

On the contrary. The competence and the pride of the trade union tradition built in the seventies and the eighties must become a crucial pillar of the Bridge to the future. The way we built a national oil and gas industry provides us with one of the key historical parallels to the rebuilding of our country we need now. In Norway, the most important forms of energy production have usually been public, with democratic control over our natural resources. At its best, the Nordic model does not do as one likes with labor power, but lets the union in on decision-making. Such was the case with oil, and such must be the case after oil.

But our most focused demand and message is a positive one. We demand 100 000 climate jobs in Norway. “There is no more potent weapon in the battle against fossil fuels than the creation of real alternatives”, wrote Klein in her book, adding that this strategy is the most powerful lever for change both South and North: “:the emergence of positive, practical, and concrete alternatives to dirty development that do not ask people to choose between higher living standards and toxic extraction.”

Most of the examples in Kleins book are from places where peoples livelihoods are threatened in the here and now, by “toxic extraction.” I know the American Nurses Association is at the frontlines of protests in the US, because they rightfully understand climate change, and fracking in particular, as the biggest of health problems.

In Norway, unemployment is low, and we have a conventional oil extraction in the North Sea which is not particularly dirty. Indeed, if we are to believe industry itself, we have the “cleanest oil extraction” in the world.

For that very reason we need an extra portion of fantasy and guts to create alternatives. The Bridge to the future Conference will show many examples of a transition to sustainability already in process. But we need a leap now, a specific Norwegian leap, to make our emissions go down by 80 per cent the next 20 years, an absolute minimum for the bottom line of nature.

That leap is what we express by the demand for 100 000 climate jobs, signed by more than 10 000 people in the build-up to our Conference today.

The organizations behind the Bridge to the future may have different opinions on what kind of climate jobs, and how they can be created. But it is obvious that we must have 100 000 new climate jobs, as we put a brake on Norwegian oil extraction, if we are to create a renewable Norway. This combined message has been absent from the agenda in Parliament and in Norwegian news media, but it is changing. More than 500 people watched our conference online during the day, and for a few hours we tweeted more on climate jobs (#klimajobber) than almost any other topic. I even got to speak on the Bridge to the future for 7 minutes, on national radio.

And our Conference was something of an international event as well. Sharan Burrow, general secretary of the International Trade Union Confederation, opened the Bridge to the future Conference last Friday by stressing that “there are no jobs on a dead planet”. Kumi Naidoo, leader of Greenpeace International ended our Conference by noting the rarity of our trinity of unions, environmentalists and Church.

This trinity will continue to work together to build a climate solution from below in Norway, as our contribution to that global geophysical force to combat climate change, in leap years.